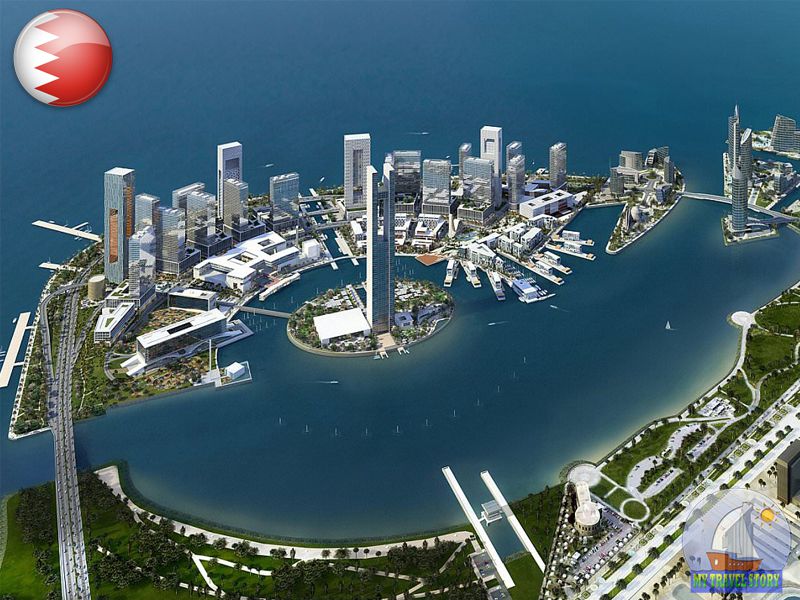 Travel in Bahrain! Tiny Bahrain is considered one of the most prospering and civilized countries of the Persian Gulf.
The country in which development of tourism is put in one row with state programs can’t but just draw attention of numerous tourists. The main dignity of Bahrain are the best world resorts, huge beaches and a bright sun which shines here all the year round. The name of this of the country warm in every respect is literally translated as “two seas”.

The capital of Bahrain – the city of Manama in which grandiose projects are constantly realized. One of them is the center of entertainments Muharraq Land which has to appear shortly and to become one of the most visited and interesting places of Bahrain at numerous tourists.

Sights of Bahrain, the most known are, first of all:

magnificent east markets on which each traveler will find to himself something to liking in memory of an interesting trip and comfortable rest. Each hotel in this country is equipped on the highest class – there is everything to please tourists. It is possible to enjoy both historical and cultural sights of Bahrain, and his delightful sandy beaches. And the real adventurers will surely estimate walks on the desert on jeeps and camels who are so popular with guests of this country.

And now is more detailed about them.

The fort of Kalat-al-Bahrain represents the huge hill of an artificial origin which is built by locals during the period since 2300 BC till the 18th century. Construction was carried out by a number of nationalities: from Persians to Portuguese. In days of old the city of Kalat-al-Bahrain was the capital of the ancient civilization which was settling down on the island Dilmun.

The hill represents a set of layers of constructions which in millennia were built on the place each other. The earliest layers of constructions are dated 2300 BC, and the first fortification strengthening has been erected in the 14th century BC. Throughout centuries the city was important trade and cultural the center, and in some times simply the fortress which protected inhabited constructions.

Now only 25% of all territory of the hill are dug out. The opened layers are presented by residential buildings, barracks, religious constructions and strengthenings. At the top of the hill there is the Portuguese fort of Kalat-al-Burtugal.

The quality pearls are the business card and a subject of pride of Bahrain. Inhabitants of the kingdom the first have learned to plunge into water in the presence of the equipment most just to get to a jewelry. The first mentions of this trade are dated in the 3rd millennium BC. Pearl trade has brought the world glory to Bahrain.
Production of pearls prospered on the island till 1929 then the world crisis which has caused damage to demand for jewelry has burst. The sad final which has completely destroyed production of pearls has taken place after the Japanese businessman Mikimoto has developed a way of cultivation of pearls on a sea farm.

Now around the world jewelry from artificial pearls enjoys wide popularity, but nevertheless residents of Bahrain continue to extract jewel from depths though it, it is rather a hobby or sport, than the branch which is bringing in the income. But trade of inhabitants isn’t forgotten and process of this magic action is reflected in an exposition of the Museum of pearls. He is located in the building of the Supreme Court which at the end of the 20th century was transferred to the Center of Heritages and traditions. Also before the building the only Monument to Pearls in the world is located.

Lonely tree in the middle of the hot desert, approximately in 2 km. from Dzhebel-ad-Dukhan (“The mountain of a smoke”, 122 m – the highest point the Bahrain Islands) is and there is a Life Tree, well-known on all region of the Persian Gulf (Shadzharat of Al Hyatt). Bahrainis call it miracle and consider a mystical symbol of determination. Really, from where the Tree of Life takes water – still not really clear, water-bearing layers in that area lie very deeply. Nevertheless, nearly 400 years this lonely plant persistently fight for life and reach already height in 9,75m.

Some Bedouin tribes idolize him, considering that this Tree is one of the embodiments of Sumer god Enki, the patron of water and life. But the legend, most popular in Bahrain, of this tree says that it (this tree) marks an arrangement of the Garden of Eden. Believe it or not…

Every year about 70 thousand tourists come to the Tree of Life to look and take a picture. And bedouins come “to talk” to a tree. They stand some time near it silently, some quietly tell something. The English reporter has asked one such picturesque Arab – in what sense of conversation? The tree answers you? The bedouin has answered shortly: “It gives hope …”

The building of the World Trade Center in Bahrain (to Bahrain World Trade Center, a thicket reduce to BWTC) is one of business cards of this small, but very rich oil state of the Persian Gulf. Seeking not to lag behind architecturally the emirates of the United Arab Emirates, Bahrain has started several loud projects – the building of BWTC just one of them.

BWTC presents itself the dual towers in the form of sails 240 meters high connected by air bridges. The project of the building has been developed by the English architectural bureau Atkins and awarded two prestigious architectural awards – LEAF Awards 2006 and The Arab Construction World.

Territorially 50-storey skyscraper of BWTC is in Manama, near the central highway of a name of the king Feysal, in close proximity to other sign places of the Bahraini capital – Pearl Square and Abrazh al Lulu’s complex. In each tower only 34 floors are allocated under offices, and the others 16 are busy with various entertaining and improving structures – the smart fitness center, beauty shop, restaurants, etc. From 26 elevators is 4 special, panoramic, made of glass. Rising on such transparent elevator, it is possible to see close the working turbines located under air bridges – say that a show unforgettable.

The great mosque of Al-Fatikha – the main mosque of Bahrain located in the capital of Manama (the only large city of Bahrain) near the royal palace. The mosque is built in 1987 and is one of the world’s largest – the molal hall accomodates about 7000 people at the same time. It is called in honor of Ahmad al-Fatikha – the conqueror and the first king of Bahrain.

Mention such fact in all descriptions of the mosque: the dome crowning the building is made of fiber glass, 60 tons weigh and are the largest fiber glass dome in the world.

In general, Bahrain absolutely small country (the smallest of the Islamic countries) and any interesting places there not especially is a lot of. The great mosque just from this small list. Have arrived to Bahrain – choose evening and reach Al-Fatikha’s mosque, believe, it in evening illumination looks extremely effectively…

Travel in Bahrain
Travel in Bahrain! Tiny Bahrain is considered one of the most prospering and civilized countries of the Persian Gulf.<br /> The country in which development of tourism is put in one row with state programs can't but just draw attention of numerous tourists.
Countries of the world
Written by: John K