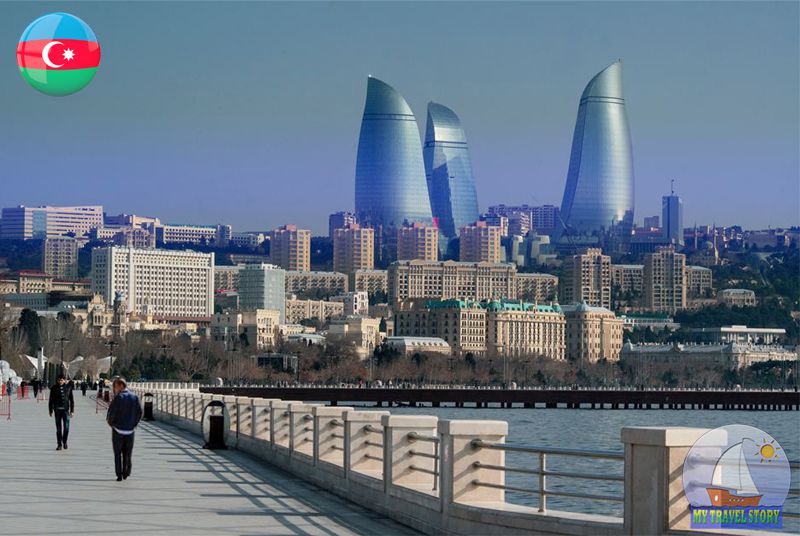 Travel to Azerbaijan! Land of Fire – Azerbaijan. What do we know about Azerbaijan? What’s a lot of sun, oil and fruit. In actual fact this country has all the prerequisites for the successful development of mass tourism. And the opportunity to make it one of the leading and profitable sectors of the economy. Azerbaijan has all the mountains and the sea, nature reserves and ancient monuments.

Of the eleven existing on the Earth climate types in Azerbaijan there are nine. Few countries can boast such a variety of natural landscapes. But in order to come to the country on a regular basis not only single fans eastern exotic and foreign businessmen, the oil, but also groups of tourists, it lacks infrastructure.

The face of the country – its capital. Business card Baku – Maiden Tower. The former part of the fortress wall, washed by the Caspian Sea, it is now on the side of the highway, opening the way to the Old Town. As befits the character of the city, it is associated with the legend of the beautiful daughter of the Shah. Unhappy Beauty threw herself from the tower to escape the infamous incest: the shah fell in love with the daughter and wanted to make her his wife. If we do not take into account the legend, the name “maiden” is interpreted as “impregnable”. Once the tower saved the inhabitants of the city from the invasion of enemy tribes. Now it is a museum. If the narrow spiral staircase to climb to the top, open views of Baku.

Admire the city and the Caspian Sea washes it is possible not only with the Maiden Tower, but also from a viewing platform in the park to them. Kirov. Once it was located Peoples’ Friendship Museum – now abandoned building in the style of Stalinist classicism and stood a giant (the Soviet answer to the Americans), a monument to Kirov. Now the park – a place of loving couples stroll.

What can we say about medieval caravanserais (inns) that operate as restaurants: here you and sturgeon feed and belly dancing show. Travel through the old town without a guide is risky – get lost in a few minutes. The streets of Old City were laid in the form of labyrinths is not accidental and is not a joke over the visiting tourists. In Baku, an amphitheater located along the Caspian coast, constantly blowing wind. Straight streets would become inevitable in the wind tunnel.

Perhaps the most original tourist attraction in the vicinity of the capital of Azerbaijan – oil fields. For a few kilometers down the road in the Gobustan reserve reaches the forest of oil derricks. By the way, Baku drilled the first well in the world and let the water the world’s first oil tanker. Getting from here to Gobustan, because of this you get into the industrial era of the Neolithic: a scattering of stones, the former bottom of the Caspian Sea, resembles the Martian landscape from a science fiction movie. Gobustan – Archaeological Reserve where rocks and in caves preserved paintings of prehistoric man: bulls, dancing men, boats, female figures with hypertrophied hips and breasts. Here you can see firsthand all that depict the history textbooks.
The luxurious caravanserai

From Baku to Shaki a long way – 305 km. But the city on the southern slopes of the Greater Caucasus mountain range is worth it to make such a long journey. It is believed that Sheki was founded about 2,600 years ago. Here are preserved monuments of the pre-Islamic period, the Christian Church of Caucasian Albania – the state that existed in the territory of Azerbaijan in the first century AD. One of these churches in the mountain village of Kish is open to visitors as a museum. Once it passed through the Shaki famous Silk Road. The city constantly appear caravans, actively developed craft. First Sheki considered the center of silk weaving, and now here to buy a silk scarf can, alas, only on occasion. But the most common souvenir became Sheki baklava made from rice flour. Even Bakuvians consider it their duty to bring this home away oriental sweets. The shops where baklava made in front of you, in the city at every turn. It should still work around a few to choose the most delicious. Sellers happy to give to sample their wares. Hospitality – a trait inherent in all Azerbaijanis.

The most beautiful building in Sheki – Khan’s Palace of the XVIII century. More recently, it was restored and open to the public for the next season. Meanwhile, in the eastern gorgeous monument of architecture can be admired only from the outside. They say at sunrise mirrored stalactites on the facade of the palace reflects the sunlight rays and he wanders around the city. This means, Khan faces his possessions and sees everything that happens in his Khanate.

Tourists in Sheki given the unique opportunity to stay in the caravanserai of the XIX century. My neighbor on the number, there are dozens of promotional tours, the kind of five-star hotels in Morocco and exclusive apartments Mallorca, entering the courtyard of Sheki Caravanserai, exclaimed: “In this place, I have not lived!”. However, at the old inn the participants of the press tour was waiting not too pleasant surprise: it turned out that the hot water and heating is only in the “luxury” rooms. But in the hotel restaurant was able to listen to Azerbaijani musicians. And try popular in the area dish “piti” – soup, nourishing mutton broth with beans. It is served on the table in the high clay pots with fresh bread and cheese cakes.

On the other side of the Caucasus Mountains lies the Guba-Khachmaz region. According to the director of management and development of the district administration of forests Lagifa Khanbabayeva, tourists from all over the world come here mainly for recreation. In recent years, investments are made in the construction of ski resorts. One of them is going to create by expanding tourist center “Suvar”, located in a mountain valley at an altitude of 1500 m is now based on the offered accommodation in cabins with private facilities, organizes rock climbing and horse riding three -. Five days, accompanied by an instructor and the doctor $ 20 per day (without food).

In the area of its medical tourist complex “Kara-Bulag” with a wellness center and mud therapy. Besides, who wants to just relax on a beautiful natural environment, it is necessary to stay in Long Forest recreation area. It was created two years ago and, according to local staff, popular with foreigners. They come here from Baku to relax for the weekend. The cozy three-room house with terrace and fireplace feel at home, or rather, in the country. Only here from the windows of suburban villas do not overlook the mountains with snow-capped peaks. The Long Forest features a sauna with a swimming pool and gym, restaurant, bar, billiards. You can go for a horse ride and book a tour to the settlement Khinalig where the locals speak the ancient, it is not similar to the Azerbaijani language. The village remained Zoroastrian temple of fire-worshipers.

Another cultural landmark Guba-Khachmaz – Red Sloboda in Guba, the world’s only place of residence of the Mountain Jews of the Diaspora. Scientists believe that the Jews came to the Caucasus from Persia before our era, and Red Sloboda – up of the Soviet period it was called Jewish – appeared 270 years ago. Residents of the settlement is honored laws of his ancestors and did not depart from them a single step, making sure that there are no mixed marriages, so there are all relatives. Visitors are welcome warmly, show two active synagogues. One of them kept for three sacred mountain Jews Torah scroll brought to the land of their ancestors.
It is understood that the bypass in five to ten days the whole of Azerbaijan is impossible. And is it necessary? If a country like, be sure to have a desire to come back.

Travel to Azerbaijan
Travel to Azerbaijan! Land of Fire - Azerbaijan. What do we know about Azerbaijan? What's a lot of sun, oil and fruit. In actual fact this country has all the prerequisites for the successful development of mass tourism.
Countries of the world
Written by: John K