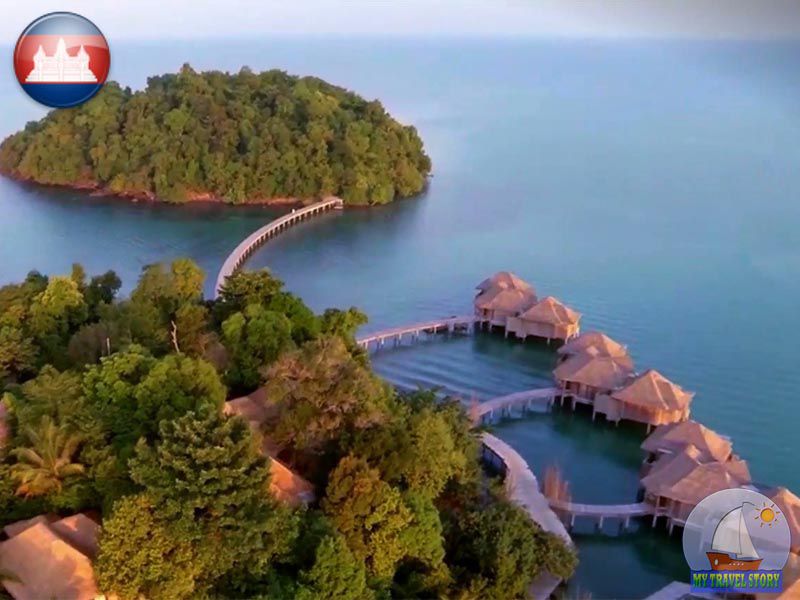 Travel to Cambodia! One of the most interesting countries of Indochina — the Kingdom of Cambodia — becomes every year more and more attractive to judges of the real travel sated with unforgettable impressions and special adventures.

Travel to Cambodia – chance to touch surprising culture, to learn the most interesting customs and to try an exotic cuisine. Besides, beach tourism as there is a large number of beaches which are concentrated in the southern part of the country is very developed.

At the moment Cambodia remains the country in which the most part of the income is brought in by tourists who go because of soft climate, low prices and an exotic cuisine here. Of course, tourism is developed not so strongly as in the neighboring Thailand here, but nevertheless it is possible to consider that conditions for vacationers are satisfactory here, especially in the large cities and the capital.

The important sight of any country is, of course, the capital. Phnom Penh is located on crossing of 3 rivers: Tonl Sap, Bassak and Mekong. According to a legend the monastery has been founded on this place after one rich widow by the name of the Stub has found 4 statues of Buddha in a tree hollow here. The hill on which there was a monastery was called Pn, from here and there was a name of the city – Phnom Penh. In this city surely it is worth visiting the National Museum of Arts, the building of it the museum is executed in traditionally Khmer style, and the famous French architect was engaged in his design. In him exhibits of an angkorsky era and earlier works of sculptors are exposed.

Also visit of the royal palace which is near the river Tone Sap will be interesting. As the most interesting part of this palace it is possible to consider the Throne-room which has been constructed in 1917. In this hall passed practically all solemn events of the country, and near it there is a 60-meter tower. If to go to the south from the Throne-room that, it is possible to see buildings of the Royal treasury and Napoleon the third country house.

For fans of art by the interesting place there will be a Silver pagoda which has been built in 1866. The architectural concept of it the building is very unusual, and the building is made of a tree. The pagoda has such name because a floor in it is covered by five thousand silver blocks which weight makes more than 6 tons. If you decide to enter inside, then you should remove footwear and a headdress. There is the main statue of the temple – Emerald Buddha which has been made in the 17th century.

The place, very interesting to visit, is the old capital of the kingdom – the city of Angkor. Ancient governors of the state who considered themselves equal to gods lived in the past here and built various temples and palaces. During the period from the X to the 12th century, this city I was one of the largest cities of the world. After the city was attacked by troops of Siam, the city has slowly begun to turn into the jungle. Only at the beginning of the 20th century works on cleaning of the city have begun. Now what remained from the city settles down on the area of 200 sq.km, to the real capital – 240 km.

Near Angkor there is an airport which makes flights from Phnom Penh, and also from the capital of Thailand. For tourists, near this historical place, modern hotels have been constructed quite recently, and now Angkor is the center of tourism of Cambodia, even despite difficult situation in the state.

The main sight of Angkor it is possible to call with confidence the temple – Angkor Watwhich is located in the southern part of this ancient city. It has been constructed in the 12th century and was used as the place of worship of Hindu god Vishnu. It is interesting that this temple is the largest religious construction in the world. In translation from Khmer his name means – “city temple”, and the space occupied by him makes 2 sq.km. The temple has managed to remain well even after emptiness of the city, and all thanks to the fact that monks didn’t leave him even during war, they live here and at the moment.

Travel to Cambodia, in one and a half kilometers from Angkor Wat Angkor Thom which is the central part of the city is located. It has been built during the period from 1181 to 1210 after the city was attacked by chamam and have plundered him. Angkor Thom is located behind a wall which forms a square which party is equal to 3 km, behind a wall there is a ditch 100 meters wide.

The main sight of Angkor Thom is BayonTemple which is in the center of “Big city”. If to look at him from far away, then it seems that this unclear heap of stones, but getting closer to him is closer, you begins to feel unusual beauty of this construction. Bayon represents the three-level building in which center the 45-meter tower settles down, and except her, the temple is decorated by 52 more towers on each of which Avalokiteshvara’s face is represented. Each of towers is located at the different height therefore being in any place, all the time it seems that Saints look at you.

Travel to Cambodia
Travel to Cambodia! One of the most interesting countries of Indochina — the Kingdom of Cambodia, becomes every year more and more attractive to judges of the real travel sated with unforgettable impressions and special adventures.
Countries of the world
Written by: John K