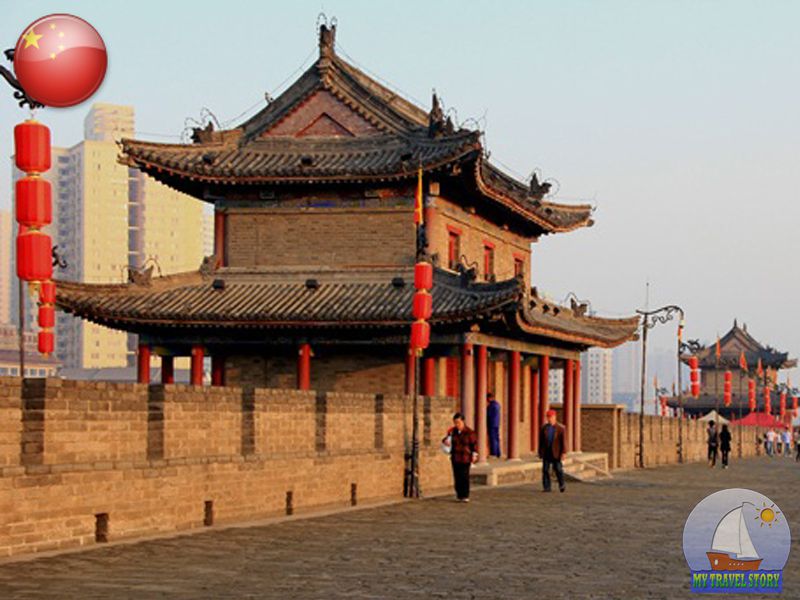 Travel in China! China – Zhongguo (A median kingdom). The center of the world – as Chinese, within two millennia, the Great wall which was reliably protecting the rest of the majestic and mysterious empire closed from the outside world call the country.

Such China always interested and attracted Europeans: beginning from wonderful travel of Marco Polo and universal hobby for the Chinese culture in the 18th century, up to recent ‘opening’ of the country which has become to one of the leading tourist directions. First of all, China is remarkable sights. ‘The forbidden city’ in Beijing, the Great Wall in the neighborhood of the capital surprise with the greatness even those who hundreds of times saw them. The best place for meditation and reflections about eternal – undoubtedly Shaolin monastery.

China – the country of contrasts. The mountains 8000 m high, sand and barkhans of boundless deserts, spacious flat pastures and narrow valleys squeezed from all directions by terraced fields. Wide rivers, idyllic lakes and dazzling greens of rice fields. The tribes which are torn off from the rest of the world wandering with the herds and the multimillion cities. Severe frosts and intolerable heat. And all this is China. The abundance of natural beauty and sights of old times, a peculiar culture, long story and ethnographic variety do China exclusively attractive for tourists.

Lasts on 6700 km from an extreme northern point in Shankhayguana to southern in Tszyayuyguana. They say that a wall – the only creation of hands human which can be seen from space.

Is in the heart of Beijing, it is known also as the Forbidden city since for 500 years of his history there could live only the emperor and his family here, and court, officials and all others lived behind his walls, and till 1925 the entrance has been forbidden mere mortals here. It is constructed in 1406-1420, the residence of 24 Chinese emperors. The total area of 720 thousand sq.m does the Forbidden city by the largest palace complex in the world, in him 9999 rooms. He is surrounded with a wall 3400 m long and a ditch with water which is called ‘Gold water’.

Parking of a sinantrop (Beijing person), Zhoukoudian, vicinities of Beijing

Mausoleum of the emperor Qin Shihuangdi and ‘terracotta army’, Xian, Province of Shaanxi

Is in 35 km from Xian, the ancient capital of China, it is constructed in 221-259 to AD. In the underground palace more than 400 burials, its area – more than 56 sq.km are placed. The main treasure of a complex – the terracotta army which is incidentally found by local peasants in 1974. In three vaulted chambers there are in total figures about 7400 soldiers and horses and 90 military chariots – practically all imperial army. Figures are executed to the utmost, two identical persons are absent.

The complex includes Mogao’s grottoes, a cave in Dunkhuane Thousands Budd and grottoes of Yulin. Work on creation of grottoes has begun in 366 g, now here 492 caves, and in them – 45 thousand sq.m of wall lists, 2415 color sculptures and about 4 thousand monophonic sculptures.

Mountain resort and temples of Chengde, Province of Hebei

The complex has been constructed in 1703-1792, his territory – 5.64 million sq.m, 110 buildings, 10 km of a palace wall and the biggest in China the imperial garden which has remained in original state. Nearby there is a temple complex from 8 temples built in 1713-1789. Temples are built in architectural style of the ethnic minorities living in China – Mongolian, Tibetan and Uigur.

The house, the temple and Confucius’s grave in Qufu, the Province of Shandong

Confucius is the most great Chinese thinker and the educator, the founder of a philosophical current which is a basis of traditional culture of modern Chinese society also today. Confucius’s temple throughout centuries was the place of worship of the great teacher. The temple has been open in the former house of Confucius in 478 g BC – in two years after his death. Today it is the biggest Confucian temple in China, it consists of 466 halls.

Ancient architectural complex on the mountain Udan, the Province of Hubei

The mountain Udan who is called still by Taykhe is the homeland of that type of fight which became well-known in the world after an exit to screens of the movie ‘Stolen Tiger, the Hidden Dragon’. Construction of an architectural complex lasted 12 years, having begun in 1412. Today he includes 8 palaces, two Taoist temples, 36 monasteries, 72 rocky temples, 39 bridges, 12 pavilions and 10 temples where worshipped souls of the died ancestors.

It is located in the capital of the region Lhasa and is at the height of 3700 m above sea level – for certain, it is the highest palace in the world. In the 7th century the king of Songcan of the Gumbo from a dynasty Tubo had two favourite concubines – the Nepalese and Chinese princesses. For wedding celebrations on the area of 410 thousand sq.m the palace in which 999 rooms has been built.

Beauty spot of the mountain of Lushan, Province of Jiangxi

One of the best-known mountains of China, occupies the space of 300 sq.km, the highest top – Dakhanyan – towers on 1474 m above sea level.

Classical gardens of the city of Suzhou, Province of Jiangsu

Suzhou – the ancient Chinese city built on water, east Venice which history contains 2500. At the time of dynasties Min and Qing there were about 200 gardens here.

The summer palace located in the suburb of Beijing is well-known for the whole world first of all as a classical Chinese garden. The palace is divided into three parts: the territory for public affairs with the hall of Mercy and Longevity, residential quarters of the empress with halls of Jade murmur and Happiness and longevity, and a beauty spot with the hill of Longevity and the lake Kunming.

Travel in China, the biggest temple in China, occupies the territory of 2.7 million sq.m, is built in 1420. Here emperors prayed for sending of a good harvest. The round Hall of prayer for a harvest – a symbol of Beijing. It is the real masterpiece built on a three-stage marble terrace.

Mount Tai Shan – one of the sacred mountains of China, occupies the space of 426 sq.km, her top – peak of the Jade emperor, towers on 1545 m above sea level.

This mountain is well-known for rich history. According to an ancient legend the emperor Xuanyuan was engaged on the mountain in special exercises with the purpose to reach immortality. She carries the name Huangshan from 747 g, many consider this mountain of the most beautiful in China.

The mountain Emae and Big Buddha in Leshana (Emei Mountain and Giant Buddha of Leshan), the Province of Sichuan

The mountain Emae – one of four sacred mountains of China, height of her main peak of Wanfo – 3099 m. Temples have begun to build already at the time of a dynasty East Han (25-220) here, and the Buddhism has come here at a dynasty Jin (1115-1234). Sights are located at various height, and therefore appear as if in various climate. Temperature at top is usually 15 degrees lower, than at the bottom. On the mountain rich vegetable and animal life – more than 3000 species of plants and 2000 animal species.

It is well-known for the picturesque places, a source of Nine turns, 36 tops and 99 rocks. There are a Wannian palace, academy Chayan and Hongqiao Bridge.

This place, amazing on beauty, – a natural zoo, a botanical and geological garden, is well-known for the mountain tops, caves, mountain sources and the dense woods.

This territory more than 60 thousand hectares is well-known for the snow tops, falls, the woods and greenish water. One more sight – the Tibetan customs and traditions of the people living here. Height of mountains – from 1980 to 3100 m. Especially beautifully here in the fall, but also the spring when the trees growing directly in lakes, drop
flowers in water, is fine too.

Picturesque place of the Huanglong, Province of Sichuan

Feature of these places – the small lakes thanks to the volcanic origin having unusual color and the form. The main sight – the well-known gorge of the Huanglong, 3.6 km long with a width of 30-170 m. There are 3400 lakes united in 8 groups of various size, forms and colors.

Travel in China
Travel in China! China - Zhongguo (A median kingdom). The center of the world - as Chinese, within two millennia, the Great wall which was reliably protecting the rest of the majestic and mysterious empire closed from the outside world call the country.
Countries of the world
Written by: John K

Avatar Mountain in Zhangjiajie, and the ancient city of Fenghuang – in the top 5 best places China’s Hunan Province