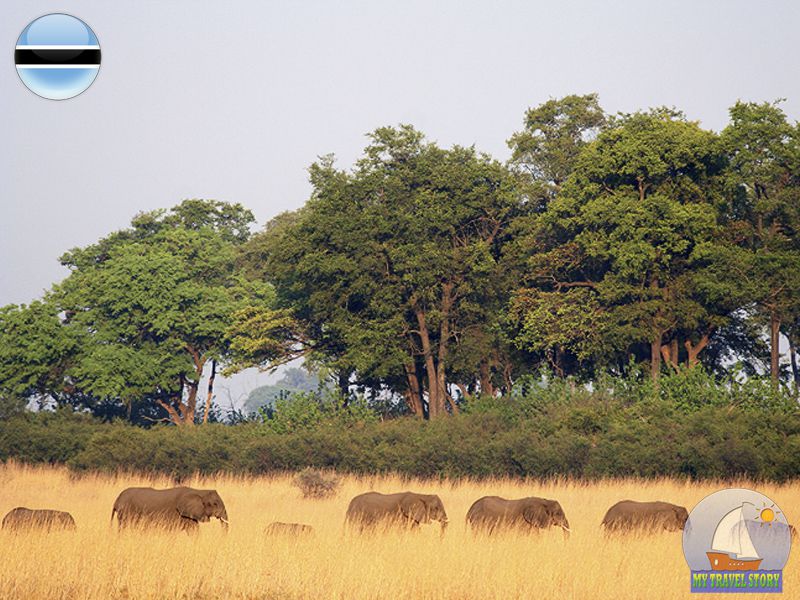 Travel to Botswana! Among fans of the African safari Botswana is considered one of the most beautiful reserved zones where strikes not only a variety of fauna, but also landscapes. 17% of the territory of the country occupy reserves.

The northern complex formed the biggest in the world by the internal delta of the river Okavango and Chobe and Linyati’s boundary river, exceeding the area of Switzerland almost twice, both desert parks of the Central Kalakhari and saline soils Makgadikgadi and Huy occupying in total the space more than 63 000 sq.km!

A certain environment does Botswana attractive to visit at all seasons of the year, offering ways of acquaintance to the nature and the natural phenomena, excellent on seasons. Thus, having arrived in November-December you will see the delta of Okavango dry, with various small lakes and beds of the rivers, but a set of posterity at predators and the period of mating dance, at that time in half a year there will be only water here that means that to 80% of your safaris will be occurs not on the jeep, and on a makor – the national boat, and sand of the desert will be covered by the vegetation meaning a life celebration. But at the same time huge distances and the areas reserves insure you against a surplus of tourists all the year round, doing a safari not only interesting, adventure, but also exclusive!

Botswana – the place for the real travelers. The capital of Botswana is the city of Gaborone. This country which has descended from book pages with a set of adventures and secrets. Botswana – barefaced, real Africa. Here all present, sometimes happens even terribly from that how here all real – crocodiles, hippopotamuses, locals, local beliefs, laws, customs. Being in Botswana by no means, under no circumstances it is impossible to violate rules of visit of this country, the rule of conduct, respect for customs and strangenesses of locals.

Being in Botswana, you can’t understand who is an owner of these lands – animals or people, it is rather nevertheless the first – animals. National parks of Botswana aren’t even parks, in our representation. These are the huge areas of the earth, wild and really dangerous where all animals lead usual life, breed, hunt, etc. and nobody disturbs them, nobody can prevent since local laws don’t allow to do it, this property, a country pearl. Certainly, in the country there is also a traditional safari – on lions, etc., but, as well as in all the civilized world – in certain time and in the presence of special permissions. And quotations on hunting here not small.
Except that this country bewitches travelers the African safari, different secrets, the rich nature and various animals, in it there are also a lot of interesting places and sights. About some of them you can read below.

Tsodilo’s hills – group of four free-standing stone hills (rocks) in the Kalahari Desert, in the northwest of Botswana. Bushmen have given to three of them proper names (on height, in decreasing order) – “man”, “woman” and “child”. The fourth, the lowest, the hill remained anonymous (according to one of the translations the Bushman of legends, is the first wife thrown by the man). The “man’s” hill is also the highest point of Botswana (1400 meters above sea level).

For Bushmen of the rock of Tsodilo are sacred – they consider them as the center of the Universe (literally) and a grave of ancestral spirits. On their vision, exactly from here, from the “female” hill, ancestral spirits operate the world, and at top of the “man’s” hill the First Spirit right after creation of the world prayed. Bushmen never hunted (and don’t hunt) near rocks as it is considered that any murder will bring to the hunter of misfortune here. Even now, conducting tours to Tsodilo’s hills, guides at first ask for permission to it from spirits of rocks. Many tourists note that they near rocks begin to feel uncomfortably as though someone big constantly looks at you a heavy look.

The delta of Okavango – the biggest midland delta of the planet formed by the river Okavango that in Botswana. Okavango flows from the Angola uplands to the east and disappears in the Kalahari Desert, without having reached the ocean. Because of a slow current of water the huge internal delta consisting of hundreds is formed if not thousands, channels and marshes. The area of the delta of Okavango makes about 15 000 sq.km., and during flood during a rainy season – 22 000 sq.km.

All territory of the delta is a huge natural zoo reserve where it is possible to see the most rare animals and birds. In upper courses, among infinite thickets of the papyrus, there live antelopes-sitatungi. Thanks to a special structure of hoofs, the sitatunga is capable to move on the boggy district like both on land, and groups of these animals are grazed directly on bogs where the rare predator is capable to cause them troubles. And there are enough predators in the delta too: lions, cheetahs, leopards, various hyenas and rare African wild dogs, and also crocodiles. The delta of Okavango serves as the house for big population of hippopotamuses for whom here almost ideal conditions. In lower reaches of the delta where already inundated meadows dominate, also elephants, giraffes, rhinoceroses, buffalo s, zebras and many, many others meet…

Travel to Botswana
Travel to Botswana! Among fans of the African safari Botswana is considered one of the most beautiful reserved zones where strikes not only a variety of fauna, but also landscapes. 17% of the territory of the country occupy reserves.
Countries of the world
Written by: John K