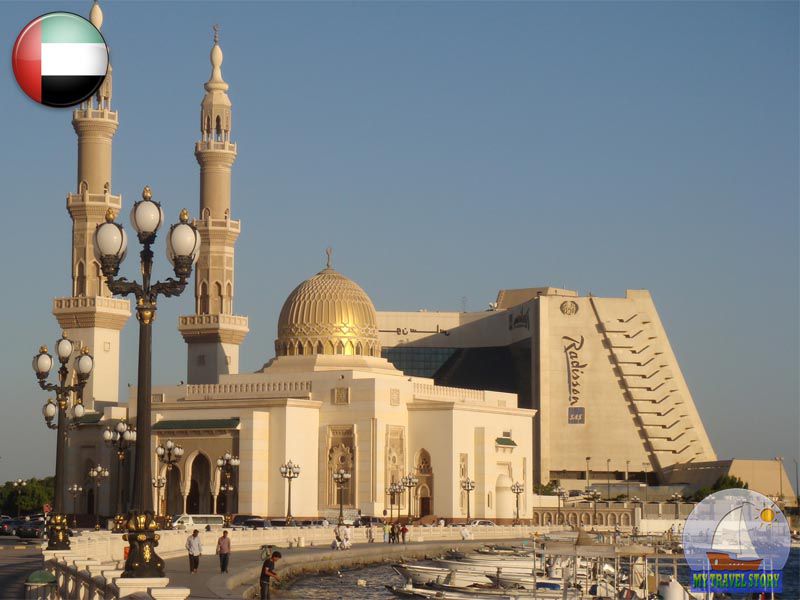 Travel in United Arab Emirates! In spite of the fact that most of people go to the Arab Emirates for commercial purposes, there are also fine opportunities for rest here. All the year round in emirates shines, the sun, on white sandy beaches it is possible to have a rest at all seasons of the year.

Improbable landscapes of this country will decorate rest of any tourist. Great opportunities are given also to fans of scuba diving, especially at the coast of the Persian Gulf in which water incredibly pure. OEA is known as very rich country therefore local hotels one of the most well-planned.

The biggest emirate in the territory of the Arab Emirates – Abu Dhabi consisting of several cities oases. The capital of the emirate – the city of Abu Dhabi. That people lived on this earth long ago, tell numerous archeological finds. Earlier this city was a usual congestion of houses near a source of fresh water, but over time he grew and now is one of the most modern cities of the world, with surprisingly direct and pure streets, buildings of the most improbable architectural forms and numerous green plantings which at local climate and a lack of fresh water, cause admiration.

One of not numerous historical monuments in the capital is the Old (White) Fort constructed for protection of a source of fresh water. Today in the building of a fort the Center of studying of the region was located. Characteristic feature of Abu Dhabi is existence of a huge number of mosques which can just appear in the middle of business modern quarter. The remarkable atmosphere to the hot city is brought by the numerous fountain lets scattered across all Abu Dhabi. The most part of city fountains is concentrated on the embankment of fountains of Cornysh Road where it is possible to have a rest perfectly in solar midday. Here, on Cornysh Road there is a huge number of entertaining institutions.

The largest trade knot of the Middle East is the Emirate of Dubai lying on the bank of the Persian Gulf. The city is divided by the gulf Chorus Dubai rub parts: the business center of the capital of the emirate – Deyra, Kurortny district with a set of beaches – Dzhumeyra and the area Bar-Dumay where there is a seaport and considerable part of large offices. It is the best of all to begin acquaintance to the city with walk by the boat on the gulf. So you will have an opportunity to get acquainted closer with modern city architecture in more comfortable conditions.

Are most interesting, in respect of architecture of construction in the Arab style around Bastakiya and old quarters of Deyra. The main city sight is the 39th floor construction in which the Dubai International Shopping Center is located. There are representative offices of the world’s largest trading companies, annually the international trade festival which is attended by more than two million people is held here.

The special attention to themselves is drawn by numerous Dubai mosques from which the mosque of Hospital of Rasheed, and Dzhumeyr’s mosque is most of all distinguished. The best way to have a rest from wearisome walk around the city – to visit one of a set of parks. One of the largest parks of Asia is exactly here – it is entertaining park “Uornderlend” in which except the park there is also a huge aquapark. At the ocean coast two parks also lie: Dzhumeyra and Al-Mumzar.

The highest structure in the world – a skyscraper of Burj Khalifa became the main modern sight of Dubai. Exact height of a construction makes 828 m (at the number of floors — 163). Earlier the skyscraper of Burj Khalifa was better known as Burdzh-Dumay, but after opening the name has been changed. In 13 kilometers from Dubai the capital of the emirate of Sharjah lies. The city of Sharjah is considered the most traditional Arab city in the territory of the United Arab Emirates, Islamic traditions are observed here more than where or in the country. The main pride of residents of Sharjah and all Middle Eastern world is the mosque of the king Feysal which is capable to contain about three thousand praying in the walls, and now it is the largest mosque of the Middle East. Thanks to a huge number of the museums in Sharjah, he has received the name “Museum Treasury of the United Arab Emirates”.

One of the most unusual emirates – Adzhman. He occupies the smallest part of the territory of all country, only 0.3% and it is the only emirate in which oil hasn’t been found. For a long time Adzhman is known as the best producer of the ships and pearls. In the capital of the emirate the main trade and commercial organizations are concentrated. It is recommended to visit the National historical museum which was located in a huge lucky construction. The collection of the museum consists of ancient manuscripts, the weapon and other archeological finds. The city shipyard on which as well as many make traditional sailing vessels years ago is of not smaller interest.

The airport of Dubai has entered charge from passengers for service