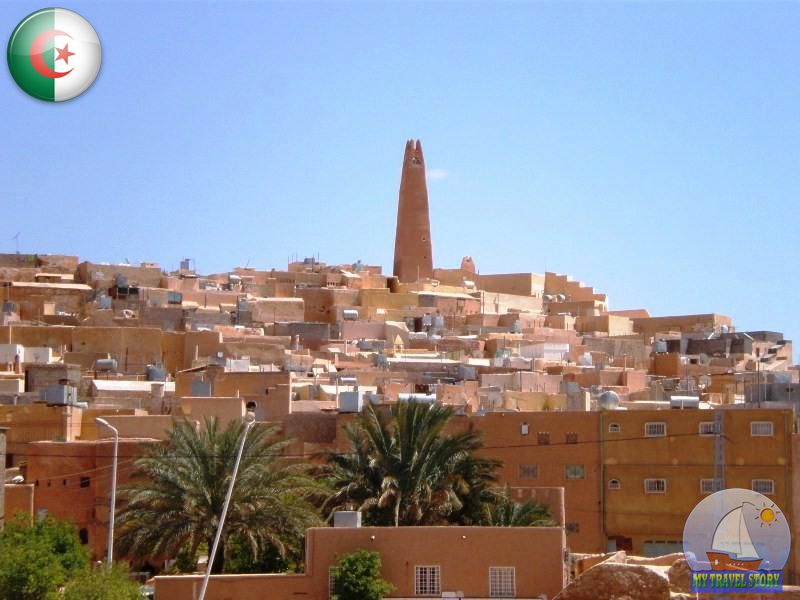 Countries of the world
Author John K Reading 8 min Views 55 Published by May 1, 2016

Travel to Algeria! You have already learned a lot of interesting facts about different countries around the world, and today we will talk about another interesting country, namely on Algeria.

Learn about Algeria may be out of print publications and online resources. If you currently do not have time or money to travel, you can prepare for it, having become acquainted with interesting and curious facts about this country.

Algeria – Africa’s biggest country, but it was not always. Algeria became the largest country in Africa due to the fact that the Sudan has been divided into two parts, the North and South.

Nearly 80 percent of the entire territory of the country is the Sahara desert. In Algeria, the longest coastline among the Maghreb countries. Its length is 988 km. In the country there is a natural lake that is filled with ink. Inks are quite suitable to be used for its intended purpose. So if you want you can visit the lake, it looks very unusual.

Algeria – an amazing country in terms of climate and natural features. In summer the temperature here reaches to 50 degrees, and in winter in some areas of snow falls. The nature here is quite varied. The country is rich in forests, seas, mountains and lakes, and of course deserts. As Chileans, Algerians kiss when they met, but strictly an even number of times, mostly two or four times. Not everyone knows that the word “Algeria” means “island.”

Algeria – a city of stairs, so its location on the hills, and at every step of many steps, both large and small. The original inhabitants of the country are the people who speak Berber dialects, not the Arabs, as some believe. The Arabs were the only conquerors. However, despite this the majority of residents do not understand the Berber language, and speaking all on something average between the French and Arabic.

Algerians just love baguettes and eat them in large quantities. In addition, in Algeria are growing truffles white sand with spectacular taste and mushrooms are considered to be relict of the Sahara desert.

In this country there is no Orthodox churches, the latter has been closed due to the complete absence of the arrival.

Military of Algeria does not have the right to marry foreign girls is prohibited by law.

In Algeria, a very popular drink HamoudBoualem, the taste is similar to a sprite, but appeared much earlier sprite.

There are no restaurants McDonald’s network.

All gas stations Algeria – government, and the cost of gasoline is incredibly low.

In connection with this fact, even the poorest families go to the old Italian and French cars.

The bread here is 8 dinars (100 dinars = 1 euro), and the most interesting is that the price remains unchanged for several years, and all thanks to a government that is trying to keep the prices of basic products.

In Algeria, there are two national soup – hrira and shorba. In different regions prepare them quite differently. It’s all their own food production, so that the Algerians will not suffer if for example to stop the supply of foreign products.

With regard to mobile, in Algeria, there are three mobile operators – Nedjma, Jezzie, Mobilis.

In supermarkets, the country does not serve alcoholic beverages, for that in this country there are specialty shops.

A man and a woman is not settled in a number of Algerian hotel, unless of course they are not married. The exception to the rule is only the Berber region of Kabylia.

Algerian men prefer plump women and in this regard, as soon as she reached the age of marriage, it was sent to a special house where fattened.

The country lacks a government central heating, instead of it in each house its own heating system, which can be switched on or off at the request of owners of the house.

Between Algeria and Morocco is closed the land border and it is a good reason, due to the possibility of penetration of drugs from Morocco.

From year to year the country alternately offer each other to open the border, but can not agree.

An interesting fact is that in this country there are many Russian, Ukrainians and Belarusians.

Algeria is not customary to give gifts to the birthday, but decided to pay for dinner and cake for the birthday.

Algeria – one of the richest countries in oil and gas reserves.

As for television, the country only 5 channels and therefore many houses festooned with satellite dishes.

Strange but true – the most delicious pizza in Algeria rather than in Italy.

Algerian law allows men to have four wives, but the reality is different, and it’s all in the past.

In order to travel to this country will have to be invited by a resident of Algeria or of Algerian companies. Tourist visas to get very problematic. All this is an echo of times of terrorism. However, if you make the effort and take the time you can find a travel agency and travel to here.

If you still get a visa to Algeria could not, you still should not get upset, you can opt for some other, equally exotic and amazing Arab country, for example, by going to the address of the official site of any decent travel company, You can get suggestions on tours in the United Arab Emirates, where there is much easier, and there is more than enough attractions.

Women here do not smoke in the streets here is considered improper, but in the car or in a restaurant in the order of things.

Usually at home in Algeria are not equipped with elevators. The reason for that – an earthquake.

There are very few traffic lights, there are almost none. There is only the police-traffic controllers, which is simply impossible to give a bribe for infringement, in view of their good salaries. For the slightest infringement of the rights can be deprived of at least three months, so the Algerians go very carefully.

After school, students take an exam, which is also the entrance to the university. For each profession need to dial a certain number of points. Even if the student does not get for example 50 points to Law, then he will not be able to enter this faculty.

In general, the first time is very difficult to pass the exam, so in school sometimes sit until blue in the face, yet still does not pass the exam.

As is well known French footballer ZinedineZidane with Algerian roots, but his nationality – Kabila. However, despite this, he never played for the national team of Algeria, because it simply does not have the national team.

In Algeria, there is a tradition that the guest should always serve dates and a glass of milk.

One of the most stunning places in Algeria – Tassili, because in this place have found ancient rock paintings showing that the Sahara was not always a desert.

The most famous film about Algeria – “The Battle of Algiers.”

The country has a very interesting law that prohibits freely exchange the national currency into euros or dollars.

In the year it allowed to exchange only $ 300, but the Algerians change currency on the black market and police tend to turn a blind eye.

If you ever visit this wonderful country, you will see the white city by the blue sea, you are unlikely to ever forget.