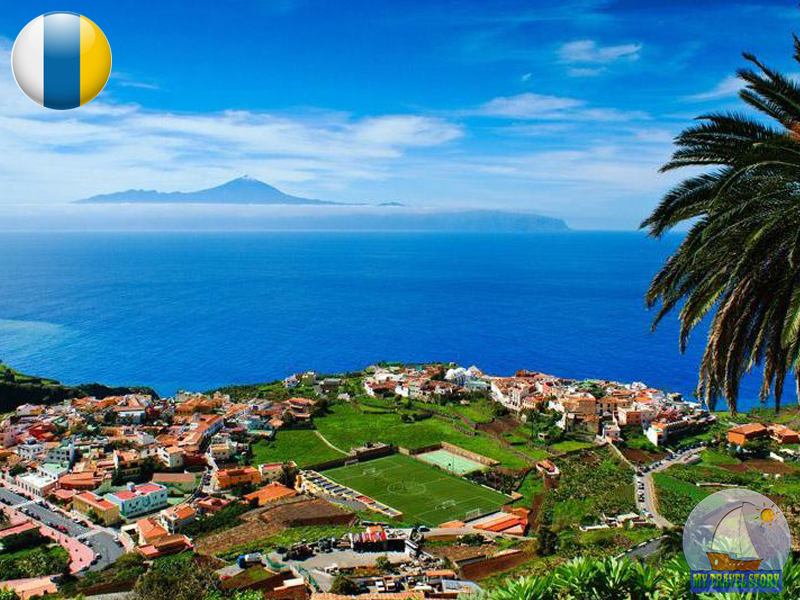 These islands are sometimes called Paradise, the Champs-Elysées or the Gardens of the Hesperides, happy island of the blessed. At 100 kilometers from the coast of Africa at a latitude of Florida they always pleasing abundance of warmth and light. The mild climate and an amazing combination in lush valleys and bizarre rock images. It stretches the fertile valleys and high-altitude desert, canyons and extensive volcanic fields, tropical gardens and the “enchanted” cloud forests, abandoned villages and, of course, a lively city.

Not surprisingly, the first legends and historical narratives of the Canary Islands, Tenerife is always mentioned, it was also called Nivaria. The island is Mount Teide (3781 m), its snow-capped peaks visible from a distance of several miles. View the majestic peaks rising above the clouds, he must have made a strong impression on the sailors of all time.

Before tribes Guanches inhabited the conquest of the island by Europeans, their development was at the level of the Paleolithic era, and a crafts and religious life have reached a higher level. Guanches, who lived in Tenerife, wore skins and fished. They knew how to work with clay, although it did not use a potter’s wheel. Guanche Jewellery differed originality. Their darts made of volcanic rock, have sharp tips. Quite intricate customs were burials Guanches well knew how to mummify a body.

Many ancient and even modern historians and writers believed that the Canary Islands are visible and the highest part of the sunken continent – Atlantis and Guanches – the descendants of the inhabitants of Atlantis.
Centers of tourism in Tenerife considered the city of La Laguna, Puerto de la Cruz, Santa Cruz, Los Cristianos and Playa de las Americas.

In the center of Puerto de la Cruz is the area of the Plaza del Charco. Once through this area passed the imaginary boundary dividing the city on the modest fishing areas and areas of local bourgeois. In the first part of today is a large democratic restaurants where you can eat tasty and inexpensive meal (fresh fish delivered directly from the small fishing port berths). A wander through the old, bourgeois, part of the city, you can see the remains of the former luxury: old houses with traditional Canarian balconies, churches, bell towers. Gran Hotel Taoro – At the end of the XIX century in Puerto first hotel was built. At the beginning of the XX century and built Hotel Marquez Hotel Monopoli. The First World War, the Spanish Civil War and then World War II – all this has paralyzed the development of tourism up to the sixties. It was then that began during the tourist boom in Spain.

Currently, the city’s population of about 26 thousand. Man. The same number of tourists and the people living here temporarily: many elderly Germans prefer to spend the cold season here – from October to May. The bulk of the population is employed in the service sector and commerce: hotels, restaurants, shops and show business.
Puerto de la Cruz each year receives hundreds of thousands of tourists. And many of them come back here year after year, considering it the best place to spend a holiday. The excellent climate, ocean, history – a harmonious combination and attracts tourists.

The capital of Tenerife – Santa Cruz city. This is a very modern and lively town with long streets, beautiful parks and squares. For example, in the Garcia Sanabria Park is one of the most famous permanent exhibitions of sculptures in the world, which exhibits works by famous sculptors such as Henry Moore, as well as the work of Canariangarde Jose Abad and others. In Santa Cruz and historical monuments.

The old church Katseption kept as relics of banners, flags and other objects of the XVIII century, the rest of the British conquerors, led by Admiral Nelson. St. Francis Church is a fine example of the baroque of the XVII century. In the same century, the palace was builtPalats Map. You can see the beautiful statue of the Virgin Mary Italian sculptor Canova, monument to the fallen in the civil war of the modern Spanish sculptor Juan de Avalos. With interest travelers visiting the Palace of the Cabildo, a castle Paso Alto, the castle of St. John. The city has a historical, scientific, anthropological museums, art galleries, cinemas, theater, various cultural centers.
The shops of Santa Cruz, you can buy goods from around the world at very reasonable prices, as the city is on the bay and is a port through which the connection between Europe, Africa and America. By the county of Santa Cruz include a number of small towns and villages that are well worth a visit and enjoy its scenic beauty.
La Laguna – the second largest city of the island, is the old capital of Tenerife, once the government of the island there was, in fact since 1978, the Canary Islands have autonomy.

It is the cultural and religious capital, there is the University of St. Ferdinand and the Diocese. The city has many cultural monuments and architecture of XVII-XVIII centuries. Beautiful monasteries, cathedrals and churches joined in its architecture and elements of the Spanish-Portuguese direction, and South American.

In the center of the island rises a gigantic volcanic cone – Snow Well (1950 m) and the Rock Cloud (1813 m). South of the volcano slope ends the famous sand dunes that stretch to the height of two kilometers from the sea shore. Thus, the topography of the island is very diverse – tropical vegetation, mountains, sand dunes. It is this feature explains the second name of the island – a continent in miniature. And indeed, here you can find species of plants growing in Africa, Europe, America. Along the entire coast of the island stretch kilometers of magnificent beaches, most of which are sandy, others – from small pebbles or black sand. In the world famous beaches of Maspalomas and Playa del Inglés in the south of the island or, for example, the famous beach of Las Canteras in the capital Las Palmas.

The island’s capital city and the province of Las Palmas de Gran Canariawas founded in 1478 emissaries of the Catholic Kings. On the island and in the capital of the highest population density among all the islands of the archipelago. In the popular area of the capital has Vegeta’s Cathedral and a small chapel, where, according to legend, he Christopher Columbus prayed before sailing to meet the great discovery.

Gran Canaria – the pearl of the Atlantic, an oasis of light. The island has recorded 270 hours of sunshine per month.

It is the second largest island of the archipelago. Its distinguishing feature – the dazzling golden beaches and white sand.

The island’s capital – the port city of Puerto del Rosario. Forget about your worries, problems, urban bustle and hectic – there are none on the island of Fuerteventura. Warm, gentle sea, the rustle of the waves, the charm of exotic vegetation and picturesque fishing lodges are calling you to relax and enjoy the simple pleasures of life. Beach love – so called local beaches. In the north of the island is the town Korradzho – the unofficial capital of European wines surfers. From the boat, you can reach the small island of Lobos. Here spend their vacation lovers spearfishing. The surroundings of the island – is an underwater park for those who prefer snorkeling and scuba diving.

Sand dunes and dunes, you will be able to win, taking part in a jeep safari or camel in Korradzho National Park.
Caleta de Fueste – a small friendly town, located south of the island’s capital. The old fishing village gives it a special color, outdoor restaurants and cafes tout your national dishes of fresh fish and other seafood.

Lanzarote is closest islands to the coast of Africa.
On the east coast dry hot climate, caused by hot winds of the Sahara, and on the west – more humid due to the Atlantic winds.

Volcanic eruption in XVII and XVIII centuries caused great damage to nature and the economy province. Lava flows and deposits of stones made landscape of the island like a lunar landscape. But, oddly enough, it attracts fans of exotic and tourists enjoy a rest here.

Staying in any of the towns of Lanzarote, you will have time to visit the other. The length of the island from east to west 60 km, and from south to north – only 16. In the vicinity of the ancient capital of the island – the city Teguse – be sure to visit the amazing volcanic caves Cuevas de los Verdas. A Costa Teguse features a water park, a garden of cacti, sporting attractions and night variety shows and restaurants. The villages of La Santa and Tinajo to the north of the island – the plantations of tobacco and tomatoes. Puerto del Carmen and Playa Blanca in the south of the island – typical tourist centers. Many hotels, well-groomed beaches with dark fine sand and dazzling white (Playa Blanca), disco clubs, restaurants, supermarkets – all this will make your stay enjoyable and carefree. In addition, you will be offered a theatrical attraction Fire Mountain and journey by camel across the fields of lava to the crater of the volcano.