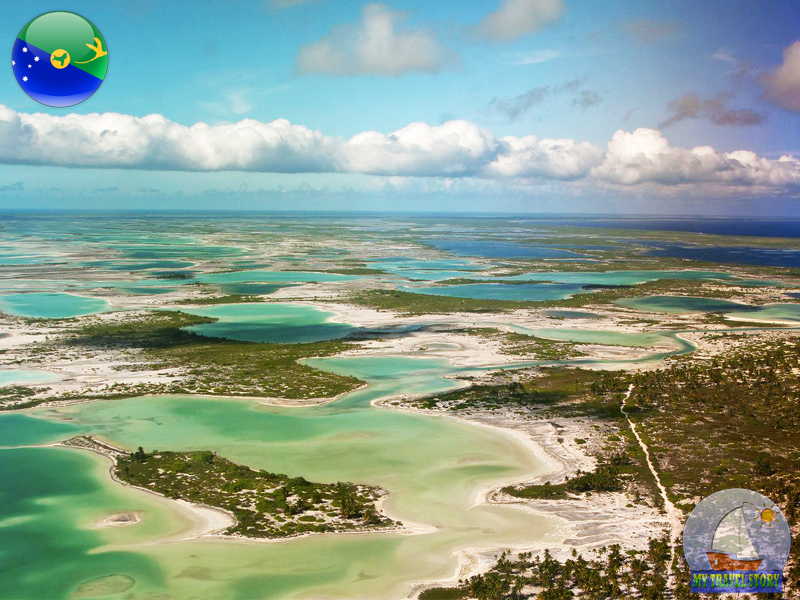 Travel to Christmas Island! If to travel around southeast part of the Indian Ocean, then near Indonesia and the coast of Java Island, the small volcanic island surely attracts attention, in the form of the peaked mountain as though growing from the ocean.

The unapproachable coast, slopes – all this strikes with the original, majestic state and beauty. It I have also seen this island the first in 1643, almost incidentally, floating by, the captain William Minors who has named him Christmas Island in honor of the holiday of the same name which has fallen on this day.

Because of inaccessibility of the coastline, throughout more than two centuries preceding date of opening, the island wasn’t visited by people and was desert. Despite the small sizes, only 135 sq. kilometers, the island just abound with the natural sights and unique places attracting on it people from around the world.

Christmas Island is surrounded with a huge coral reef outside which, practically at once, ocean depth begins. It attracts on the island many divers from around the world, persons interested to feel new feelings of deep immersion. The many kilometers coral and rocky underwater walls abounding with caves, dredging and the courses the great number of exotic underwater inhabitants and many kilometers ocean abyss under legs, isn’t enough in what corners of the earth, it is possible to feel similar feelings still.

Many come here to admire the huge whale sharks often suitable to coast of the island. The review of coastal beauty of the island, would be incomplete without description of numerous small and picturesque beaches, each of which is unique and unique. Huge interest for tourists from around the world, represents National Park of Christmas Island into which magnificent rainforests with some species of the plants which have remained only here, ocean coast and reeves and the world’s largest natural reserve of birds enter.

All these sights together with comfortable hotels of the island only the small list of what does this small most beautiful island desired and convenient for visit by millions of people from around the world, each of which can find here that to him to liking.

Christmas Island has a set of natural temptations which will satisfy visitors of all age and levels of preparation. The rocky massif of the island is rich in caves, one of which are washed out in the thickness of rather soft limestone by water streams, others – are formed by exits of volcanic gases at the time of the active volcanism which has created the island. Now all of them are excellent objects for tourism.

Cave Daniel Rua with the bed of the river passing on it, Lost Leyk Kouv (‘the Lost Lake Cave’) with well-known stalactite ‘fields’ – Fantazm and Phantasmagoria, and also ‘the main hall’ in a cave of Bishops called by the name of Roy Bishop who has conducted considerable researches of caves on the island are most popular.

Grotto – the tiny cave connecting to the sea and having the small reservoir with fresh water. The movement of waves through the narrow openings connecting a cave to the sea provides interesting sound effects.

The area Deylz (‘Valleys’) is a number of openings in rocks where streams of the fresh water which is flowing down from the central plateau have created ‘paths’ to the sea. All the year round in water flows of Deylz the blue crabs living in the confused roots of the high trees falling to water well feel. At the very end of valleys small, but very picturesque falls of Hugh – the good place for foot walks are located.

It is also very popular with tourists of Bloukhols – a number of picturesque rocky formations on the coast of the island which hiss and spurt the water forced in numerous natural openings by the ocean. Here even the survey platform for safety of tourists is built, however nobody will be able to guarantee dryness of your clothes – some emissions of water fly by during a whole gale to 30 meters!

The island is surrounded with a powerful coral reef. Behind an external side of a reef actually there are no coastal shallows, the sea bottom very sharply goes on depth approximately to 5 thousand meters within 200 meters from the coast.

Travel to Christmas Island. Huge interest for tourists from around the world, represents National Park of Christmas Island under which territory 63% of all territory of the island are allocated. The park protects several ecosystems of the island at once: magnificent rainforests, with some species of the plants which have remained only here, ocean coast and reeves and the world’s largest, natural reserve of birds.