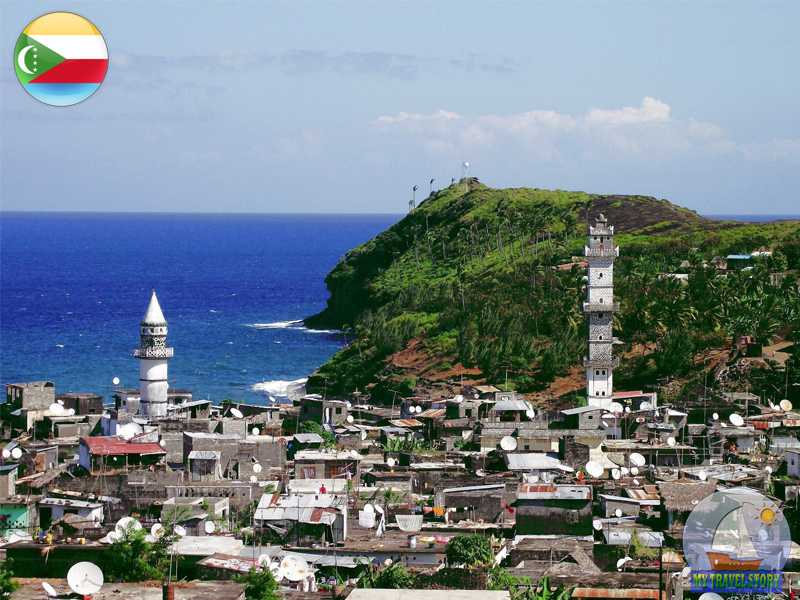 Travel to Comoros! The Comoro Islands are located to the south of the equator, in the Mozambique Channel. From the North they are washed by waters of the Indian Ocean.

To the South from islands there is Madagascar, and from West side – Tanzania and Mozambique. In a word, islands very beautiful, though don’t enjoy still wide popularity in the tourist environment.

On the Comoro Islands there are places, interesting to visit. In Moroni there are a lot of ancient mosques. The popular place – Medina port, ancient Arab quarter. Oranges and lemons grow in internal court yard of houses. On coast of harbor the ships and boats by which locals put out to sea for fish last.

You should not go on Comoros to the rainy season lasting from November to April: terrible humidity will dement you, and constants of a storm and the kashkaz wind won’t allow to lie on the beach. The best time for a trip – the period from May to October, when on islands warmly and chilly.

Great Comoro – the biggest and “young” island. There is an active volcano 2,361 m high of Moroni – the noisy Comoros capital, the youngest and most populous city on islands. Life in him boils at any time, it is a lot of restaurants and cafe, shops, hotels. The most civilized beaches are in the western part of the island. There are all entertainments – a casino, bars, noisy discos, small restaurants and cafe, souvenir shops. Buni – one of the best beaches in northeast part of the island. The civilization hasn’t strongly affected this place so it is possible to enjoy the wild nature. Shomoni is a town slightly to the south of Buni. The gulf is reliably protected by rocks from a black lava, and below – snow-white sand. On all coast small cozy bungalows are scattered. Fumbuni – a resort in southeast “corner” of the island. This best place for diving on Great Comoro. Besides, there are most white sand.

Nzvani – is famous for the woods and the deep rivers. It is the most green island from all and the most populated. There are many sights. Moyá – the small village with the excellent snow-white beach protected by rocks and reeves where there is a small hotel at which restaurant prepare such tasty seafood dishes what doesn’t happen also at the best European restaurants.

Travel to Comoros. Mvali – the small and wild of all Comoro Islands. On him infrequently there are tourists as the infrastructure is developed not too well. But here the most beautiful coastline, a rainforest, excellent beaches and so bright sun that in 2 days it is possible to get fine suntan.

The city of Mitsudzhe lying in 11 km. to the South from Moroni, is the good place, for acquisition of the unique local hand-made articles which are cut out with considerable art from different breeds of a tree. The city first of all is known for the woodworking workshops – the main branch of the local industry specializing in creation of decorative ‘east’ doors, sun blind, caskets and furniture, and also known and a magnificent carving – local products like candlesticks and small memorial boards from a tree of valuable breeds are famous.

By the way, actually there is a lot of tombstones in Mitsudzhe – local cemeteries are extensive and beautiful, but for this purpose there are serious reasons. Mitsudzhe’s inhabitants believe that they are protected from genies by spirit of the Saint who has been buried in the nearby village of Ikoni. The legend says that the Saint promised protection and protection that village where there will be his grave. Mitsudzhe’s inhabitants have stolen his body from Ikoni and have buried him in the city and that nobody could steal relics of the Saint at them, they have constructed a set of false, absolutely identical graves to confuse also genies and potential thieves.

Travel to Comoros
Travel to Comoros! The Comoro Islands are located to the south of the equator, in the Mozambique Channel. From the North they are washed by waters of the Indian Ocean.
Countries of the world
Written by: John K