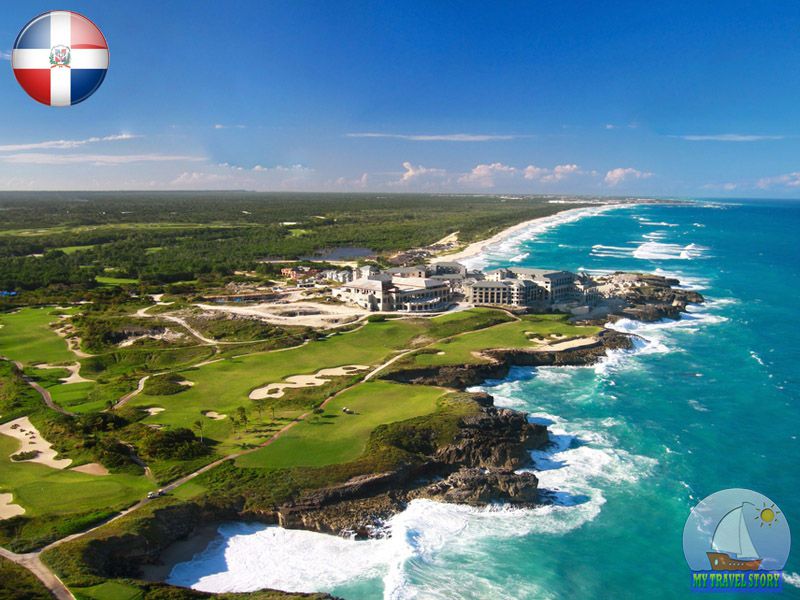 Tourists mainly come here to relax on the local resorts. In the Dominican Republic is the world-famous resort of Punta Cana. It stretches for 40 km along the eastern coast of the country, which is called the Costa de Cocos, which translated from Spanish means “Coconut Coast”.

Punta Cana – is a series of resorts with luxurious hotels, shopping malls, restaurants, nightclubs and beaches of white sand. It consists of 5 Length of the Beach: Bavaro, Cabeza de Toro, El Cortecito, Punta Arena Gorda and Macau. Bavaro Beach is the most developed in terms of tourism, there is the majority of hotels in Punta Cana. The beaches of Cabeza de Toro and Punta Arena Gorda awarded the “Blue Flag” and considered among the best in the region. El Cortecito Beach is famous for its restaurants, where you can taste dishes from seafood, and schools of windsurfing and kitesurfing.

Hotel complexes in Punta Cana is a whole small towns with their own infrastructure and operate on the system “all inclusive”. Territory hotels are so large that visitors to navigate through them we have to use the services of special trams or take a golf cart.

Punta Cana – the best place to play golf in the country. Many hotels have their own golf courses. Also, tourists are offered a variety of excursions to Costa de Cocos – jeep safari, all kinds of boat trips, excursions by helicopter and submarine dive to the reef’s largest country.

In Punta Cana is a water park Manati. Here you can see not only the marine life and reptiles show their involvement and swim with the dolphins, but also exotic animals and birds living in the midst of lush tropical vegetation and breathtaking performances with horses. Every year in August in Punta Cana Championship runs deep sea fishing.
North of Punta Cana is a secluded beach of Playa Limon. The beach stretches for 3 km along the coast. In its vicinity are protected Laguna Limon and Laguna Redonda, on the banks of which lie the mangroves.

To the east is the beach of Playa Caribe, where in the afternoon marked the high waves that attract surfers here. Further along the coast is a beach Guyakanes. beach infrastructure is poorly developed: there are several bars and restaurants.

The following is a resort in Juan Dolio. Here, less noisy than than in Boca Chica, however, coastal waters and beaches less attractive places entrance to the sea is hindered because of the debris of corals. Recently in Juan Dolio at a rapid pace under construction new hotels. It is worth noting that some of the best restaurants of fish dishes on the entire south coast are located in Juan Dolio. In the coastal waters of Juan Dolio are long chains of underwater caves and sunken ships, so that you can go diving.

In the vicinity of the capital, you can relax on the beaches of the city of San Cristobal, which sits to the west of Santo Domingo. Here, the most popular beach is the beach of Punta Palenque.

Travel to Dominican Republic. The most popular resorts are located east of the northern coast of Puerto Plata. Firstly, it is an area of Costa Dorada with the resort of Playa Dorada. The Playa Dorada is located a dozen hotel complexes, working on the system “all inclusive”. The beaches of the Costa Dorada are composed of yellow sand and awarded the “Blue Flag”. Also in Playa Dorada is the field for the game of golf.

25 km east of Puerto Plata is Sosua Resort. Most often, tourists come here who want to scuba diving and snorkeling, because in the immediate vicinity of the coast is a coral reef with colorful underwater world. In addition, from Sosua you can go on a boat trip with a glass bottom, in the winter – go on excursions to whale watching (January-March) or fall into the largest water park in the Caribbean Columbus with a variety of water attractions. Also Sosua is known for its vibrant nightlife: scattered throughout the city cafes, bars and discos.

15 km east of Cabarete Resort is located – one of the best places in the world to practice windsurfing, kitesurfing and surfing. All year round there are blowing steady north-east trade winds. Peak season is in June, September and December and April, during those times of the year Cabarete beaches are crowded with tourists.

More to the west along the coast (135 km away from Puerto Plata) near the border with Haiti, is the town of Monte Cristi. The local coastline is a ridge of limestone cliffs in white, who are cut off to the narrow sandy beaches. Here are the most popular beaches of the National Park of Montecristi.