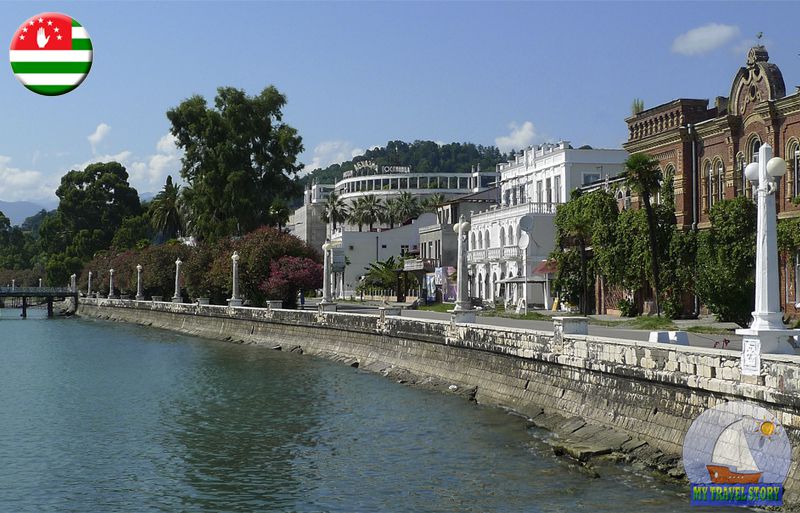 Countries of the world
Author John K Reading 6 min Views 20 Published by May 6, 2016

Travel to Abkhazia! At first glance might seem that Abkhazia is a very small country, very similar to the Russia. But I assure you, this is erroneous opinion! Because Abkhazia is a separate and very interesting country, and the Black Sea there are a completely different – the water is crystal clear, turquoise color. This is the perfect place for an unforgettable vacation!

Officially Abkhazia consists of seven large areas, dividing the country at about the same on the part of the area. The most interesting is that all they are required to capture a piece, and the coast, and the charming Abkhaz summit. Countdown areas easiest to carry on with the Russian border: the first – is Gagra, Gudauta further, Sukhumi, Gulrypshsky, Ochamchira, Tkuarchal and Gali, bordering with Georgia.

Gagra district – the one that almost borders on Russia in Sochi, as the natural border between the two countries stands the river Psou. The coastline of this region stretched by as much as 53 km away, and the main point of attraction of tourists here for decades considered Gagra – the warmest place on the Black Sea within the Caucasus. Palm periodically tries to snatch Pitsunda, but so far not very successfully.

Gagra district is considered one of the most developed in terms of infrastructure, and is renowned for its subtropical agriculture, the cultivation of citrus fruit, kiwi fruit, and of course, grapes.

Local attractions all know firsthand – this ruins of Abaata, and the Prince of Oldenburg Castle. But there is something special – the best racetrack in Abkhazia in the village Bzypta.

Gudauta area is known by several major beach resorts of the country – its own Gudauta, New Athos and with its amazing temples and caves, or Musser, with its popular among our tourists boarding house. In addition, it is in this area is the temple of the Assumption in Lykhny, Psyrtshinskaya tower and so unusual for the region’s attraction as an artificial waterfall hydraulic complex of the 18th century.

Sukhumi district – one of the central problems in Abkhazia. It is the capital – the city of Sukhumi and villages GumistaAchadara, Yashthua, plenty of health resorts that specialize in lung diseases and a large number of archaeological sites. The latter include excavations at Eshyra glorified Kamansky temple Besleti Bridge and revered among the Orthodox tomb of St. John Chrysostom.

Gulripshi district – area occupies the second place in the country, and its capital is considered to be the village Gulripshi. Here, in the village of Sukhumi Babushara Airport, located only airport in the country. Citrus, sandy beaches and lakes – the main “chip” of the place. And in the area Gulripshi opened many medical sanatoria and health resorts, including the first on the Black Sea coast of the Caucasus sanatorium. Activities in this area is ideal for quiet fans, families with children or pensioners – there are no bars and clubs, but an abundance of cozy beaches and attractions Dranda Cathedral of the Assumption of 6th century, the Great Abkhaz wall with Kelasur tower fortress Tsibilium, somewhat surprisingly picturesque canyons and gorges, the famous Azantsky dolmen.

Ochamchira district – covers an area of once glorious and rich in historical area Abzhua events. The center and largest city – Ochamchyra – Located on the beach, another large settlement Myku – in the mountains. You can get here by bus only, w / d line is destroyed and have not yet recovered. The hotel infrastructure is not developed here practically, can only stay in the private sector. However, it is in the Ochamchira district is one of the most revered churches in Abkhazia – Church of St. George. In Myku drew attention Cathedral of the Assumption of the Blessed Virgin Mary. Tourists often go on an excursion to the karst cave of 2700 m, in the village Uatap.

Tkuarchal district – the only one in Abkhazia, whose eponymous capital Tkuarchal is not on the coast and in the mountains. But next to it is one of the 7 main sanctuaries in the country – mountain Lashkendar. Tourism here, alas, is almost not developed, the population is mainly engaged in coal mining, which is in the mines downstream Galidzga river. She, by the way, is famous for its therapeutic waters. On the shore thereGalidzga thermal springs used for the treatment of musculoskeletal and peripheral nervous system. Main local shrine and tourist attraction – Bedia Cathedral 10th century, where the tomb of King Bagrat II.

Gali district is located 77 kilometers east of the Abkhaz capital on Eritskaliriver, another river – the Inguri – considered the official and also a natural border with Georgia. The district center – the city of Gal, which can be reached only by bus. This is the most difficult to access area of Abkhazia, which is practically not developed tourist infrastructure, hotels and entertainment there. At the same time, there is the most atmospheric towns with medieval architecture and a well-established way of life for many centuries. It is worth to visit the late feudal fortress Tsarchen, see King Rostom baths and ancient church Anchiskhati, climb to the ruins of the citadel of Narikala or tower-fortress on the hill Satandzho. And, of course, to visit the vast reservoir Gal. And this area is famous for its tea, figs, walnuts, persimmons and tangerines.

Travel to Abkhazia
Travel to Abkhazia! At first glance might seem that Abkhazia is a very small country, very similar to the Russia. But I assure you, this is erroneous opinion! Because Abkhazia is a separate and very interesting country, and the Black Sea there are a completely different - the water is crystal clear, turquoise color.
Countries of the world
Written by: John K